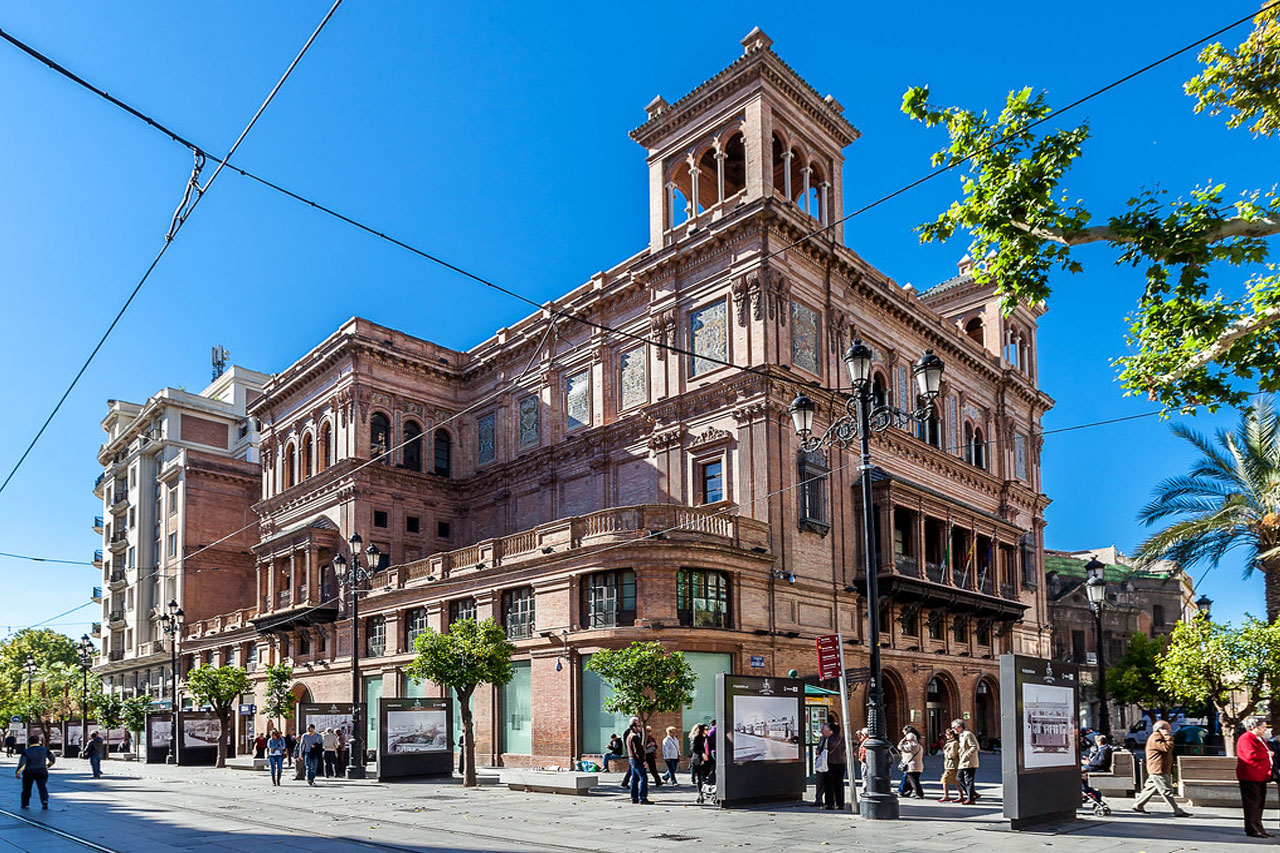 Today we will talk about a building that was very important for several generations of Sevillians although today it is quite unnoticed for the younger population: The Coliseo España Theater.

A few hundred meters from our restaurant, entering the Avenida de la Constitución through the Puerta de Jerez, we find on the left, at number 38, a large red brick building with a flat and regionalist style.

This beautiful construction was projected within the plan of great works of the Ibero-American Exhibition of 1929 by the brothers José and Aurelio Gómez Millán, authors of other emblematic works such as the neighborhood of the Workers’ Retreat or the San Juan de Dios Hospital.

The Coliseo España Theater would occupy the space formerly occupied by the former convent of Santo Tomás.

Before its inauguration, The Coliseo España Theater had been called, in the first instance, Reina Mercedes Cinema, in honor of King Alfonso XII’s wife, and later Reina Victoria Theater, in homage to Alfonso XIII’s wife. However, the day of its opening would be done with its final name.

As any visitor can see, it has 3 facades in sight but the two main ones, the one that faces Avenida de la Constitución and the one that looks at Adolfo Rodríguez Jurado street, were designed with exquisite taste, combining the carved brick with large cloths of glazed ceramics of regionalist influence and linked to the tradition of ceramic crafts in the city.

The main facade, which we can see from Adolfo Rodríguez Jurado Street, has two towers / viewpoints in each corner with rich coffered ceilings and iron finials.

Regarding the interior decoration, in the halls of the Colosseum Theater Spain we could find wall paintings with traditional motifs from the theater world, very fashionable at the time, but above all the decorative motifs, without doubt the most outstanding was the large central lamp of bronze and crystal, with 180 points of light, 6 m. high and 4 m. diameter.

A building called to be the great cinema theater of Seville for many years and, in fact, it was for some decades. However, the history of this building, like that of so many others in Seville, has a bitter side.

Between 1975 and 1979, the building was completely emptied to house the headquarters of the Bilbao Vizcaya Bank, missing everything except the large central lamp that we can continue enjoying today at the Lope de Vega Theater.

The Junta de Andalucía acquires it in 2002 and today houses the central services of the Tax Agency.