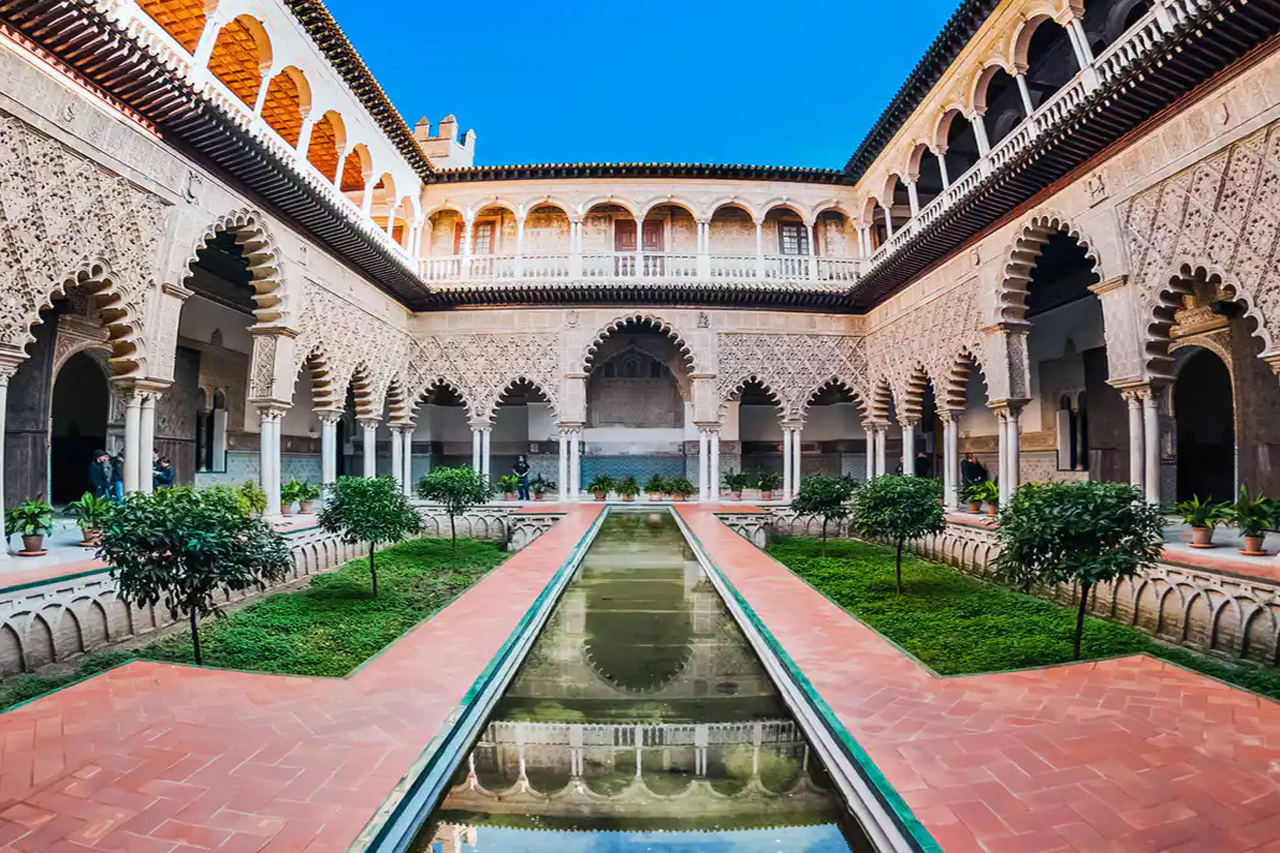 The Royal Alcazar of Seville is a walled palace complex built in different historical stages that has its origin in the High Medieval period, although there are data that show that the space that today occupies the Alcazar site was already inhabited since the eighth century BC.

Close to it archaeologists have found remains of a Roman building of the first century, whose function is not known with certainty.

And on the remains of this Roman construction, already in Visigothic times, there is evidence that a paleochristian church was built, identified by some as the basilica of San Vicente.

In 914, the Umayyads built a fortress with a quadrangular wall attached to the ancient Roman wall of the city.

After the fall of the caliphate, the abbey aristocracy took over the city government and in the middle of the eleventh century, the citadel expanded southward, doubling its surface.

Inside, a series of small buildings were built and there was probably a main building, palatial, where the Gothic palace is currently located.

In the second half of the 11th century, the famous king Al-Mutamid extended the fortress to the west and some annexed palatial buildings were built. This was the primitive Alcazar of the Blessing (Al-Mubarak).

In the 12th century the Almohads completely reformed all this space. They created a system of walls that linked the Alcazar with other fortifications to the Guadalquivir riverbed.

The Alcazar then reached the tower of Abd el Aziz, located on the current avenue of the Constitution.

Inside, a dozen new and larger buildings were built. The walls of the Alcazar also became part of new and renovated fortifications for the defense of the city. These defensive works culminated at the beginning of the 13th century with the construction of the Torre del Oro.

After the conquest of the city, Fernando III did not perform any action in the Alcazar and the Christian court was established for decades in the ancient Almohad spaces.

Between 1252 and 1260 Alfonso X took advantage of the space of the main building to build the Gothic palace.

After the earthquake that occurred in 1356, which severely affected the city, King Pedro I ordered the demolition of three Almohad palatine buildings to build the Mudejar palace, which was attached to the Alfonsí Gothic palace. These works finished in 1364.

Throughout history, the Royal Alcazar of Seville has been the scene of various events related to the Spanish Crown. Between 1363 and 1365, it was the seat of the Castilian court.

In 1477 the Catholic Monarchs arrived in Seville, using the enclosure as a room, and a year later, on June 14, 1478, their second son, Prince John, was born in the palace. It is known that this royal birth was assisted by a Sevillian midwife known as “La Herradera”.

In 1526 the wedding of Carlos I with his cousin Isabel of Portugal was celebrated in the Alcazar.

In 1823, on the occasion of the military intervention of the Hundred Thousand Children of San Luis, the royal family, with Fernando VII at the head, resided in Seville for two months, in which the Royal Alcazar of Seville served as a royal residence.

By decree of April 22, 1931, the Government of the Second Spanish Republic, at the proposal of its Minister of Finance, Indalecio Prieto, ceded the Alcazar and its gardens to the municipality of Seville.

The last event related to the monarchy was on March 18, 1995, when a lunch and reception was held on the occasion of the wedding of Elena de Borbón, daughter of King Juan Carlos I, with Jaime de Marichalar

The Royal Alcazar of Seville is the residence of the members of the Spanish Royal Family when they visit Seville. This makes it the oldest royal palace in use in Europe.

Unesco declared it a World Heritage Site, next to the Cathedral of Seville and the Archive of the Indies, in 1987.

The Royal Alcazar of Seville has been internationally known for becoming the stage for the popular television series Game of Thrones, based on the literary saga by George R.R. Martin.

This location would give life to an enclave within the kingdom of Dorne, under the power of the Martell family, well-known characters for the followers of the saga.