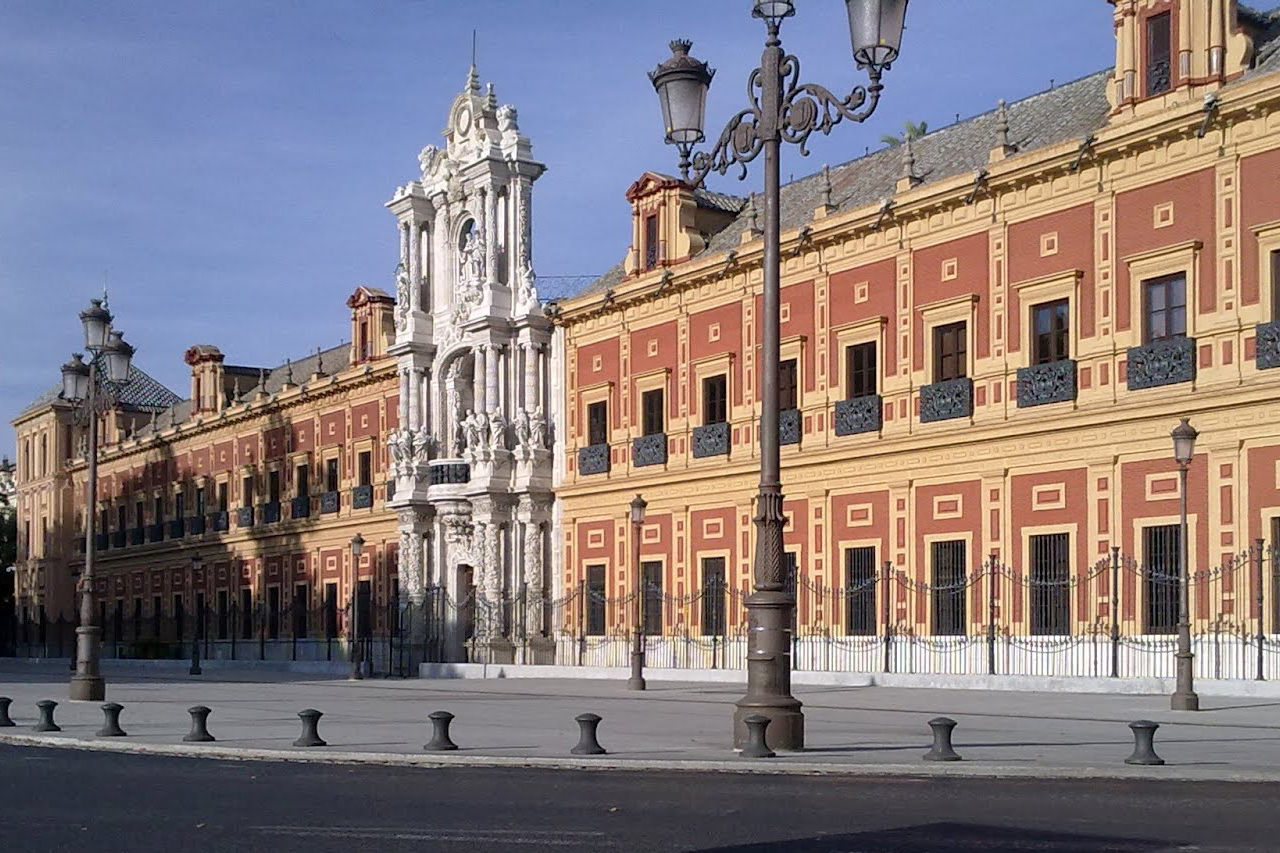 The maritime traffic between Seville and America throughout the sixteenth century requires that the University of Sailors together with the Council of the Indies, among other institutions, promote during the seventeenth century the construction of a new large seminary school that would welcome children orphaned from the city in order to turn them into ship pilots.

Discarded a first location in the Larga street of Triana (current Pureza street), are some lands belonging to the Inquisition in front of the Puerta de Jerez, called as San Telmo’s haza, which will give shelter to the new school.

The works began in 1682 and are completed in 1796. More than one hundred years of work with several breaks due to lack of funds.

From here, the palace changes its uses, owners and appearance. In 1841 the school moved to Malaga and the San Telmo Palace became the Naval Military College, in 1847, the nautical teachings were definitively suppressed and became the seat of the Royal College of Humanities until 1849.

In 1849, Antonio de Orleans, Duke of Montpensier, bought the palace to use it as a residence, carried out architectural reforms and acquired works of art from painters and sculptors of Seville to decorate the rooms.

In 1877, in the main hall of the palace, the Spanish King Alfonso XII asks the hand of the daughter of the Duke, Maria de las Mercedes de Orleans, who dies after 6 months of marriage giving life, without knowing it, to one of the songs most popular Spanish folklore: Where are you going, Alfonso XII?

The palace began to be the seat of the Andalusian government since 1992, when the Junta de Andalucía signed an agreement with the archbishopric for the cession of the palace in exchange for building a new seminary on Avenida de la Palmera.

If there is a particularly significant space of the San Telmo Palace for the people of Seville is probably the north facade, completed in 1895, where we find a series of twelve illustrious sculptures of Seville (some by birth, others by residing in the city) made by the sculptor Antonio Susillo. The characters represented in this gallery are: Juan Martínez Montañés, Rodrigo Ponce de León and Núñez, Diego Velázquez, Miguel Mañara, Lope de Rueda, Diego Ortiz de Zúñiga, Fernando de Herrera, Luis Daoíz, Benito Arias Montano, Bartolomé Esteban Murillo, Fernando Afán de Ribera and Téllez-Girón and Bartolomé de las Casas.