A place with history

TOBY eats the world is located in the historic center of Seville.

You can find us in the Cristina Building, between the Torre del Oro and the Giralda.

We are aware of the immense luck that is that our restaurant is located on the Almirante Lobo street, in the basement of the emblematic Edificio Cristina, because, if we stop for a moment and look around, we still You can breathe the aroma of centuries history in each of the monuments that we can see from our door. And it’s something that we believe we should share with our customers.

A good piece of history that not only reduces itself to the city itself, but extends to all of Spain, Europe and America, since Seville was for more than two centuries the Gateway to the West Indies and, therefore, witness of thousands of wonders and adventures that crossed between the Old and the New World from the arrival of Christopher Columbus to Guanahani in 1492.

To place anyone who does not know the area, a few meters on the left of our restaurant you can see the emblematic figure of the Torre del Oro, and across the river, Betis Street, leaning always to the shore, which announces the entrance to the well-known neighborhood of Triana. On the right, the Puerta de Jerez, one of the most famous entrances to the ancient city because it led directly to the Archivo de Indias, formerly known as the Merchants’ Market, and a few steps from this important archive, the imposing presence of the Cathedral and the Giralda on the one hand and, on the other, the Reales Alcázares, the only royal palace still in use in Europe.

Above us, the Cristina Building, built on the occasion of the Ibero-American Exposition of 1929 and originally conceived as a Hotel, being unique in its style, since it supposed a fusion between neocolonial architecture and the Art Deco. Its architect was Modesto López Otero, author of such emblematic buildings as the Gran Vía Hotel or the Unión y el Fénix Español building in Madrid.

From its terrace, you can distinguish infinity of symbolic places of yesterday and today as the dome of the Church of the Savior, the old Jewish quarter of Santa Cruz, the Hospital de la Caridad, which still conserves works of art in its church. Valdés Leal or Murillo, the Plaza de España, the Isla de la Cartuja or the Torre Sevilla, the first skyscraper in Seville, recently built.

A whole series of reasons to stroll and get lost  through the streets adjacent to our restaurant, not without first having tasted the best of our cuisine to cope strongly with the enjoyment of a city with much to offer. offer for the visiting public and the native. 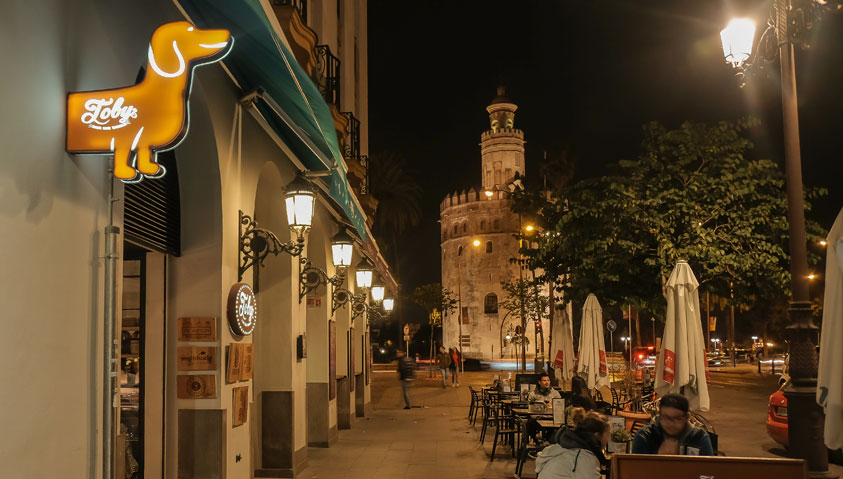